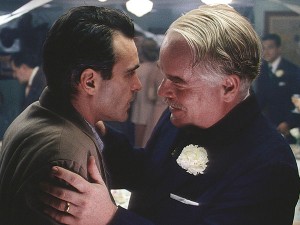 What (exactly) would it take for me to act as an agent or catalyst in your process of individuation?

And, I concede, that prima facia there are several quite credible candidates as possible answers here. One could, reasonably, suggest, at least from a psychodynamic perspective, that there are any number of issues, complexes and even neuroses that can evolve constructively through any meaningful relationship.  They don’t always naturally, but they can. Furthermore, as a student of mine suggested, any functional relationship, such as that between educator and student can serve to further the subject’s individuation. This makes sense.

Nevertheless, the nature of the relationships that interest me here are of a more specific type, the type exemplified by Dodd and Freddie. What is the alchemical ingredient that needs to be present for one person to wake another up, wake them up to themselves, to their possibilities? My intuition is it can only be one thing, love.

I believe the only way for me or for anyone else to really touch you, to connect with you at this level, the level where I wake you up to who you are is if I have a profound, I would almost say unconditional, love for you. Only, love, as I see it, allows me to care sufficiently to make the effort to wake you up, to let you know you who you really are.

Love is, to put it metaphorically, the fuel of this transformational engine.

With this qualification in place, that it is love, and only love, that can act as a transcendent point of connection between two people, we may enquire as to how a process like this actually takes place. What allows or facilitates someone to connect with previously hidden or unconscious dimensions of their being, such that that connection is a catalyst to individuation. What is it that needs to be recognised and acknowledged? I suggest that in another which elevates them, which makes them unique and beautiful, that which differentiates them, a transcendent quality. This may sound simpler to do than it is. Recognising and acknowledging that in the other which makes them genuinely beautiful takes courage, real courage; for in acknowledging and amplifying your light I must be willing to see my own light wane, if only temporarily.

In a sense I must be willing to lose myself so that you may be found.

Also, significantly, in order to do this I must possess the ability to see that which is truly beautiful in another despite their inevitable flaws. In The Master Freddie is anything but perfect. As, Dodd, correctly points out to him, during a heated argument, he (Dodd) is the only person who cares for Freddie. So somehow he is able to see something genuinely worthwhile, worth caring about beneath the surface of Freddie’s highly anti social persona. Before I’m ever going to be able to recognise and reflect something transcendent in you I would need to have done more than my fair share of work on myself. Without insight, sensitivity, vulnerability and a strong ego such an exchange is unlikely. Whatever else we may seek to criticise in Lancaster Dodd, it speaks for him that he is able to see in Freddie what others are not. What we are not talking about is flattery. Many have mastered the art of flattery and use it as a manipulative technique, either to poor or better effect, with begin or malevolent intentions. But either way, flattery is the very antithesis of what we are attempting to articulate here. Finally then, what I think is possibly the most critical point: An act of this nature is not done for one’s own growth, awakening or individuation. If my act is not a genuine act of love, rather than some form of self-gratification, it belongs to a different class of actions.

When I see you, and what I see is a portal into the infinite, if I  with reverence, humility and courage acknowledge that which I see, the possibility exists that you will wake up to your true self. Anything less is does not constitute an act of love such as I use the term here.

[1]This is an idiosyncrasy of mine, re-watching a movie I have recently seen with a close friend or lover. A few years ago, at a conference at the University of Arizona, I met computer scientist Dr. Gino Yu, who spoke about a “two person experience”; specifically that when we participate in an experience in the company of another person, the nature of the experience is different. The experience is somehow amplified by the presence of another. I have found this to be true even when it comes to watching a movie, which on the face of it is a pretty solitary activity, unlike having a coffee and a chat after the movie for example.
[2] http://en.wikipedia.org/wiki/The_Master_(2012_film)
[3] My thanks to Igor Sturmheit for drawing my attention to this idea. Specifically, in his relating to me the story of the relationship between Rudolf Steiner (the founder of Anthroposophy) and Walter Johannes Stein.

A critical analysis of Jung’s contribution to depth psychology of the Collective Unconscious and its value for psychotherapy.

This is a copy of public lecture delivered to Psyche at the University of Pretoria 9 September 2015 Introduction Carl Gustav Jung, (1875... read more