The Myth of the Sexually Aggressive Male

The Myth of the Sexually Aggressive Male 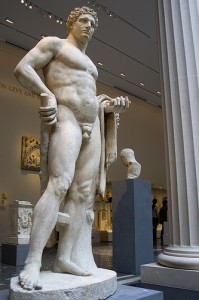 We are all familiar with the conventional ideology of the sexually aggressive dominant man and his sexually submissive female counterpart. Naturally in contemporary western society this ideology has been challenged. How successful such a challenge has been is open to debate. The purpose of this post though is to explore this contemporary ideology on the assumption that it remains for the most part paradigmatic.

Stephen no I have nothing against women at all; I’m very fond of some women in fact. I know enough to be afraid of them though, to know that they take what they want.

Let’s consider the more specific topic of the debate at Wits, prostitution or commercialised sex. Here as well there are examples from other cultures and other historical periods wherein the woman fulfilling this role can be viewed quite differently to the marginalised, abused, vulnerable victim of society that seemed to be the subject under discussion in the debate. In fact even in contemporary society Lucy Allais[4] provided an example, which if not paradigmatic is also not exceptional, of a contemporary sex worker who appears anything but disempowered. I suggest that this idea of the sexual dominant masculine and his submissive female counterpart is a cultural product which serves the patriarchal power structure rather than being an essential property of gender. Following this that the actions of Madlala-Routledge and the abolitionist movement she represents, whilst well intentioned are misguided. Contrary to their stated intentions they implicitly support the patriarchy whilst explicitly opposing it. Their very attempt to protect the sexually objectified vulnerable female reinforces the implicit patriarchal ideology. Beyond this debate though, the idea of dominant aggressive masculine and submissive feminine is deeply embedded in the collective sexual imagination of our society. It serves an important purpose, which whilst possibly a product of political ideology now transcends it, that is simply the idea that opposites attract. The more masculine the man, with all the associated images including dominance, and ideas that that evokes and the more feminine the woman, with its associated imagery including submissiveness, the greater the degree of sexual tension, anticipation and (presumably) satisfaction in the sexual act. So much so, that even in homosexual relationships this male-female, dominant-submissive act is played out. Is there a fundamentally different way to relate sexually other than as opposites and as dominant-submissive? And please before you rush to provide a Hallmark greeting card sentiment, I am talking about f**king not ‘making love’! Is it possible to evoke the same or a similar degree of sexual tension without acting out the contemporary sexual power paradigm? Whilst no obvious answer presents itself to me at least, I think this is a really interesting question and a sincere attempt to answer it could genuinely aid in the evolution of society. Finally I want to leave you with something Madame Madlala-Routledge said in response to question from a young, rather enthusiastic, man in the audience, question and answer paraphrased below.

Young man:  Let’s assume that I am married and my young wife and I both really enjoy sex. Now it happens that whilst using a sex swing [god knows what that is, but anyway] my wife breaks her neck. Now the sexual act between us would no longer be satisfying for either of us. But still you know we would like to stay married because marriage is not only about sex there are other things…[i.e. in this case is my use of a prostitute with my wife’s consent not only appropriate but a good thing?] Madlala-Routledge: Nice egalitarian question; let’s reverse the situation and assume it was you who broke your neck. How would you feel about your wife satisfying her sexual desires with another man, whilst remaining married to you?

With that I bid you adieu. Stephen.

[1] I stand to be corrected on the exact name of the body; and whether it is representative of the continent or simply South Africa. Also, as I understood it, Ms. Meji is, hersef, a former sex worker.
[2] The obvious intention here is to protect the marginalised sex workers whilst not endorsing the industry as a whole and placing the legal onus on customers not to purchase the commodity through threat of criminalisation. There was disagreement amongst the panellists as to the efficacy of this model, however reading between the lines it did not sounded as if it was a flawed system in its practical application.
[3] This left me wondering into which classification Freud falls, sexual optimism or pessimism? I’m not sure…I would lean toward pessimism which I think is closer to Freud’s global philosophy; however I am not sure.
[4] Professor Lucy Allais, head of the Wits Centre for Ethics.

When you lie in bed, alone, late at night, contemplating your own mortality, as the Grim Reaper grins at... read more

The Childish Pursuit of Happiness

‘”Well,” said Pooh, “what I like best,” and then he had to stop and think. Because although Eating Honey... read more

On the Nature of Love: an unromantic critique

When you love someone what is it that you love? Let me tell you why I ask. I think that often... read more

Hansel & Gretel and the Breadcrumbs of the Apocalypse

There is great disorder under heaven, the situation is excellent. (Mao Zedong, as quoted in Living in the End... read more

This post is largely drawn for a recent conference by OPUS (an organisation for promoting understanding in society) appropriately... read more

Just how Curious are You?

As people we always want to know things. We are incurably curious you might say. We want to know about... read more

Love Alchemy: and Why New Age Love is Basically Bullshit

Love is not abstract it is particular. I hate to shatter your illusions, but when Michael Jackson shouted out... read more

What Does The Road To Damascus Look Like Today?

Last night I had the privilege of attending a talk on the Second Coming of Christ. Nick Thomas, previously... read more