The Dark Side of getting to know yourself

The Dark Side of getting to know yourself 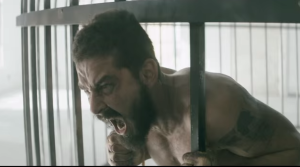 Sia, an Australian singer, recently brought out a video that disturbed some people and drew a fair amount of criticism. The video is of an adult male and a young girl fighting in a cage. Sia responded to this criticism by saying that the two actors portray a single person, namely herself, and represent her two warring-self states. It is a wonderful depiction of the war between shadow and ego. Coming to terms with your shadow is hard, unpleasant and often violent. The shadow does not wait around submissively to be seen and recognized. It screams and rages and shouts and fights and bites. And, of course, it is all you. The shadow is that which has been repressed, suffocated, abused, abandoned and neglected. It is the monkey on your back, whispering in your ear, turning your head to make you look at the things that it represents, those things that you don’t want to know about yourself. If you are familiar with the Golden Compass series, you can liken the shadow to the dæmons that all the people are bonded to. Freud’s proverbial Id, which cannot hide its face and intentions. And to have your dæmon ripped from you is fatal. It is part of you and you cannot separate from it. People try though. They try hard to suppress the shadow. They fear it. It scares them. It haunts their dreams. They believe that they are good and kind and sincere and nice. The bad in the world is out there, they can see it all around them and they are afraid. Some people avoid the shadow by looking at the sun. Like Lucifer they chase enlightenment. Or they pursue knowledge and the intellect and get caught in mental masturbation, suppressing their feelings of anxiety and frustration. Other people want to find something that will protect them from the evil. They believe that either the angels or some talisman will guard and keep them safe; or that if they ignore or pray for the evil in the world it will not affect them. Most people focus on “what could be”, “should be”, “will be.” They think that they can control themselves and their environment. If they try harder, concentrate more, focus, think positively, it will all come right. They don’t work with what is. But the truth is that the shadow is not under your control. It is out to get you and it will, no matter what. There is nothing more destructive than ignoring your shadow. You lie, deceive, manipulate, and act out maliciously, which you then self-righteously justify to yourself so that you can carry on believing that you are “a nice person”. And it is so easy to justify your bad behaviour. “They deserved it.” “They had to be stopped.” “Who doesn’t want to listen must feel.” “I was only defending myself.” “I will not be abused.” “I was only trying to help them.” “They had a right to know.” “They were on the wrong path.” “What are they so upset about?” Of course the list is endless. And all the while you are surrounded by bad people. The world is full of evil. Everywhere you turn there is meanness, violence, hatred, selfishness and people full of wickedness. News flash! They only reflect what is inside your own heart. Acknowledging your shadow is the first and hardest step to becoming whole. Being whole and not broken. Forgiving yourself, making friends with your shadow, accepting who you are, nurturing yourself, learning to love yourself for who you are really and not who you wish you were, these are some of the benefits you will reap from working with your shadow. It is dirty work, ongoing work, but, most importantly, also very rich and rewarding work. Facing yourself in the mirror of the other, (which is) the world around you, is often disturbing and painful. If you dislike something or someone intensely, there is shadow content hidden in this relation. The object of your dislike contains something of your shadow in it. Deep and honest reflection will reveal it to you. Realising that you have the potential for dishonesty or being unfaithful is not easy. As is realising that you carry the pain and scarring from a devastating experience. But once in consciousness, it can be addressed and opposed or healed; whilst it remains unconscious it will wreak havoc in your life. Similarly if you love and adore something, there are also these wonderful, exciting and surprising talents and hidden potential that remain untouched and unseen whilst in the unconscious. By unearthing these guilts, sins, desires and hidden treasures you will liberate yourself. Suppressing desire and guilt takes an enormous amount of energy and eventually will express itself in your body as dis-ease and fatigue or depression. The biggest transformation you can experience is through the mining of your shadow. Whilst the shadow’s beliefs, desires and talents are hidden in the unconscious, it will not benefit you in the slightest. On the contrary, whilst unconscious it will thwart you at every turn. You will project these qualities onto others which does not expand or improve anyone, least of all yourself. You will shrink and become less and less until you are a petrified shallow version of yourself. Liberating the unconscious removes these projections, energizes you and expands both consciousness and personality.

Unfortunately there can be no doubt that man is, on the whole, less good than he imagines himself or wants to be. Everyone carries a shadow, and the less it is embodied in the individual’s conscious life, the blacker and denser it is. If an inferiority is conscious, one always has a chance to correct it. Furthermore, it is constantly in contact with other interests, so that it is continually subjected to modifications. But if it is repressed and isolated from consciousness, it never gets corrected. C. G Jung [1]

Please heed this warning though. This work is not for the person who believes that they will work through the shadow and come out the other side an even nicer person! This is not the goal nor is it a realistic expectation. Whilst you have this attitude, you will not make any progress. You will remain in the false belief that you are at heart a nice person. You are not a nice person, you are a bitch or bastard and this work is about facing that about yourself and integrating it into consciousness. You can’t extract these things from your psyche. They are there to stay. It is how you work with it and what you do with it that counts, but that means that on a daily basis you will be confronted by your shadow. You have to accept that these things are part of you and love yourself for it. You are not a cardboard copy of a perfect person. You are a human being and being whole is about embracing your humanity. How can you have compassion with the beggar and lost souls of the world if you do not recognise and have compassion for the beggar within? Archimedes said, give me one firm place to stand and I will move the world. This image is an almost perfect metaphor for becoming conscious and working with the shadow. The firm place that is referred to is the ego-consciousness. The ego is the centre of, and our access to consciousness. The consciousness referred to here is that of self-awareness and self-knowledge. This work is about strengthening and amplifying ego-consciousness. Only by taking the role of the ego seriously can you do shadow work. The shadow represents the opposite to the conscious ego position; it is the true other in the psyche. Only by being fully incarnated in and present to the ego can this work be done. If your approach is to dis-incarnate (transcend) your ego-consciousness in favour of a “spiritual” or “karmic” type outlook, this work is not for you. If you are part of a new age movement, where the ego is something of a dirty word, something to ignore, because you are part of “a much bigger spiritual reality”, don’t pursue this path. This work is for people who realise that they are human and fallible. It speaks to those who recognize that they have something to do with what they are experiencing in the world. It is for the courageous and fearless. It is for people who are willing to forgive and open their hearts to themselves. It is for people who, to borrow from Jung; want to be whole, not perfect. To watch Sia’s music video reflecting her war with her shadow follow this link. [1] “Psychology and Religion” (1938). In CW 11: Psychology and Religion: West and East. P.131 Did mommy & daddy neglect to mention that you are a freak?

Yes I am afraid it is quite true, you are a freak. This short communication should remove any lingering... read more