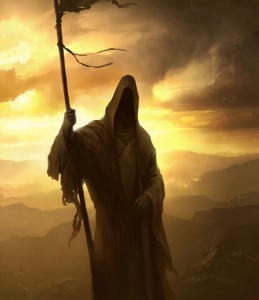 When you lie in bed, alone, late at night, contemplating your own mortality, as the Grim Reaper grins at you, what face do you see? I frequently suggest both in my posts and to those I work with personally, the importance of facing up to the reality of death. To face the fact that you are not immortal. That the candle flame of your life will be blown out one day by the unfeeling and unrelenting wind of time. This fundamental truth has to be understood and come to terms with, by anyone wanting to get to grips with the basic coordinates of human existence. No spiritual system or teacher is worth its mustard unless it can deal with this awkward reality. I would hardly call myself a Buddhist but one story attributed to the Buddha stays with me.

Walking with his disciples they came across a human skeleton at the side of the road. Buddha told his disciples to look carefully at it and to know that soon they too would assume just such a form.

The reason it is worth placing such emphasis on this unpleasant truth is because its recognition is frequently essential to engender a sense of urgency for, i.e. to live, an authentic life. There are two competing myths about death. Of which, most of mankind have bought into one or the other. The first myth: the Afterlife This idea comes to us from the great religions, both Eastern and Western. Your soul or spirit is immortal and will survive the death of your physical body. There is a reward in the afterlife for a life ‘well lived’, either in the form of a utopian, paradisiacal, existence, or a rebirth into the physical realm in a more ‘evolved’ form. Naturally the inverse applies here also, a life that fails to reach a certain standard, usually of moral conduct, is punished by a failure to reach paradise or a reincarnation with an increased Karmic debt. What is convergent across the many permutations of this myth is that you are not synonamous with, or reducable to, your physical body. You have (or essentially are) a ‘spiritual’ component that will remain after you depart this mortal coil.

The second myth comes to us from natural science. You are a physical organism, born into the universe. You birth was preceded by billions of years in which the universe existed without you, and in which time life evolved to the point that an organism such as you could come into existence. Beyond that, you are one of some 7 billion people alive on the planet today and your life occupies a short span of time measured against the history and possible future of mankind. The immanent (relatively speaking) death of your body means the absolute termination of your existence. You are, in other words, in cosmic terms, supremely insignificant. The above expositions on the two prevalent myths are admittedly simplistic and too brief. However being alive at this time means you cannot but be aware of these two positions and their arguments and counter-arguments, by the champions of spirituality and secularism. That being noted though it must be acknowledged that, death is a profound mystery. Rationally it is a veil beyond which we cannot see. And it is hard to imagine, no matter how much human knowledge grows, how this mystery might ever reveal its answer to the living. Of course it may never reveal its mystery to the dead either, but the point is whether it will or will not, can only be known once you cross the threshold, the mythical river Styx. The philosopher Immanuel Kant suggested that there are certain concepts which fall outside of the domain of reason. Certain truths transcend the reach of reason and are constitutively unknowable. These include ideas such as the first cause, God, infinity and the ‘I‘. I suggest death qualifies as one of these mysteries. All of which brings us to the original question: what face do you see when you contemplate death? Because, I think, one thing is clear, whatever face you do see has got more to do with who you are and what you believe, than what may be objectively true. I would wager that you have established yourself in one of these two myths or vacillate between them. And even if you have adopted one of the two myths as your own truth you are keenly aware and troubled at times by the possibility of the other. This kind of paradoxical formulation, is for Jung at least, the essence of truth. Ultimate truth transcending our rational capacities presents itself to our minds as a paradox. One sees the same idea in Zen practise where the student is given a paradoxical koan to solve as way of teaching him to transcend dualistic thinking.

Is there a 3rd Possibility?

Is there another possibility not contained in the two myths noted above? Personally I think there is, although I cannot offer you conclusive or even particularly persuasive evidence of this. It is more of an intuition that has guided me to this belief. For what it is worth, let me share it with you. Jung, in common with many other wise men, believed in the power of paradox. That truth is revealed through paradox in a more profound way than in a simplistic one sided formulation. Well I think, in both of the above myths, what is missing is you; your individual and subjective perspective. Both of these myths objectify, and in a sense commoditise, you. In these formulations the objective world of which you are but an infinitely small and relatively insignificant part contain you. You are born into them and they set the co-ordinates of your existence. But is this the only way of looking at yourself and your life? What is the subjective perspective? Have you ever personally experienced the world as existing without your presence? Now, trust me, I know that on the face of it this seems a ridiculous question . And in fact I’m not even disputing that the world continues to exist without you, objectively speaking. (Although there is in fact some debate in physics about that fact currently as you may know, but let us accept this as being true for now). The point is although it may continue to exist objectively without you, it certainly doesn’t exist subjectively without you, unless you decide to bestow that truth upon it. All you know is that when you open your eyes the world is there and when you close them it goes away- for you at least. This is an absolute, not subject to change and an indisputable truth. It is far more real than anything else you have been told, which may or may not be true i.e. you are a single part of a cosmic system, one small part etc. etc. What you absolutely know is that you are. Consider the possibility that the world is contained in you, as opposed to you in it. There is a story from The Restaurant at the End of the Universe (Hitchhikers Guide to the Galaxy Series, by Douglas Adams) that illustrates this idea quite nicely.

Zaphod enters the Total Perspective Vortex, a torture device which annihilates by showing you how infinitesimally small you are compared to the universe. However when Zaphod enters it the Vortex shows him he is the most important being in the universe. This not because the Vortex has malfunctioned but because Zarniwoop has created a virtual universe for the sole benefit of Zaphod, in which he is the most important creature ‘ source, http://en.wikipedia.org/wiki/The_Restaurant_at_the_End_of_the_Universe

The question is which is the virtual universe and which the ‘objectively real’? Or to put it in Jungian terms, is it possible that both of these conceptual truths are merely simulations of an underlying, hidden reality. This line of thinking is hardly original and allusions to this are made in many mystical systems, but the possibility of this truth is definitely esoteric rather than exoteric. Anyway, I think this idea is well worth considering as a counterbalance to your objectification in the traditional and contemporary death myths. Until we speak again. Stephen.

Hansel & Gretel and the Breadcrumbs of the Apocalypse

There is great disorder under heaven, the situation is excellent. (Mao Zedong, as quoted in Living in the End... read more

Do You Long For The Freedom of Your Chains?

This is a guest post by Ryan Parker. I was recently privileged enough to spend two weeks on holiday... read more

The Search for Consciousness. Where are we in 2010?

In April this year the Centre for Consciousness Studies, at the University of Arizona, will hold their 9th, bi-annual,... read more

The issue of science versus spirituality is a dilemma which many people around the world have been grappling with... read more

This, my friends and only companions, is the question. In true paradoxical style it is both the most important... read more

Is it Meaningful or Random? Part 2 An irrational Perspective (in defence of synchronicity)

Part 2 of 2 Read Part 1 first The question is whether our experience of ‘meaningful’ coincidences, such as Jung’s synchronicity,... read more

The Birth of Self